Current data tells us that the birth rate in the six-county SCAG region is declining, and will likely continue its decline over the coming decades. At the same time, a substantial segment of the population will be 65 years old or older. 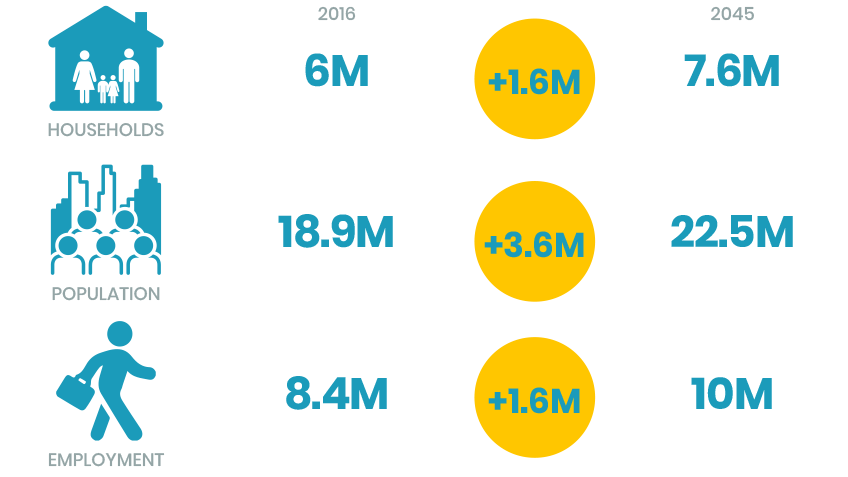 Changing Age Demographics in the Region

Since most Millennials—the generation born between years 1982 and 1996—entered adulthood during the Great Recession, difficulties in securing stable employment have caused many of them to lag behind previous generations in building lifetime wealth. During this time, Millennials were less likely than previous generations to form a family, move out of their parents’ homes to form a household, or purchase their own homes. This has had the effect of increased demand and higher prices in the rental housing market since many would-be homeowners lacked the income to buy.

Housing affordability continues to be a major concern in Southern California and the lack of affordable housing is becoming a major factor for those that chose to leave California. In 2006, 20 percent of individuals that migrated out of California noted that housing cost was a determining factor for leaving the state. In 2016, that figure had nearly doubled to 37 percent. Millennials represent over half of the outmigration from the most expensive metro areas despite representing only a quarter of the population.

While by most measures the region has recovered from the Great Recession, median incomes are still below their levels from the late 1980s and middle-income job growth has been both stagnant and virtually non-existent since 2000, highlighting the importance of planning not only for all ages, but for all economic levels as well. Coupled with the increasing outmigration of Millennials due to stagnant wages, difficulties finding a secure entry- or mid-level job and rising costs in housing, the impact on our region’s economy could be drastic.

With the region’s increase in multi-family housing and widespread investments in public transportation, Connect SoCal not only factors in these types of changes, but also tries to anticipate the types of needs for the aging Baby Boomers and Millennials looking to plant roots, as well as the trends that will continue to change our region throughout the duration of the plan. Will people be driving more or less? Will access to public transportation or usage of transportation network companies get people out of cars? These are the types of questions that will impact our planning for the future.