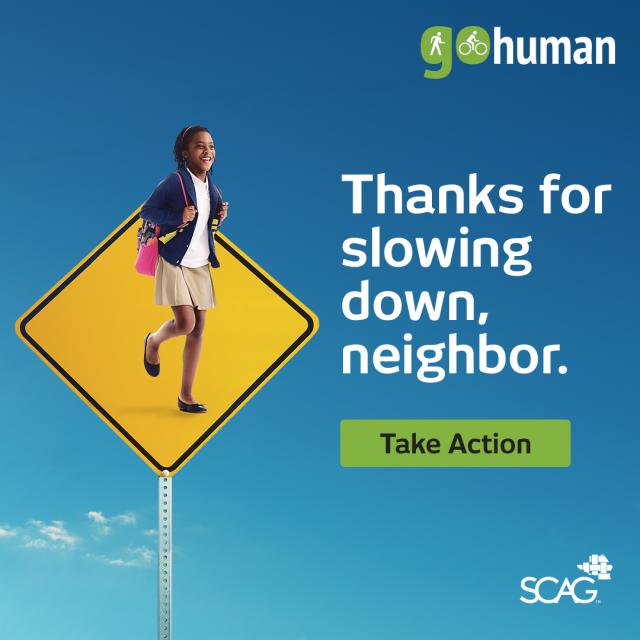 This month, SCAG’s Go Human program re-launches its advertisement campaign with new messaging to encourage safer driving to improve safety for people walking and biking. Residents across the region will see ads in creative places, reminding drivers to slow down and watch for people walking. The advertising campaign is just one of many strategies to support safety across the region.

According to SCAG’s Connect SoCal long range transportation plan, walking or bicycling accounts for 8.9% of all trips in the six-county region, but 27% of all roadway fatalities. The number of collisions is disproportionately higher in disadvantaged communities, which account for two-thirds of all fatal auto-pedestrian and auto-bicyclist crashes. Moreover, people living in households with incomes less than $35,000 per year are 80% more likely to make walking trips than those earning more than that amount.

To address the problem where it is most severe, SCAG is targeting the Go Human campaign re-launch in disadvantaged communities and along the High Injury Network. Drivers in these areas of the region will see updated safety messaging while they’re making their trips. Ad locations include billboards, gas pumps, and at convenience stores. Additionally, the campaign will optimize its digital ads to target drivers before they begin their commute. Ads will appear both in English and in Spanish.

Along with these advertisements, the Go Human Safe Driver Pledge will call on drivers across the region to commit to safe driving to help keep the streets safe for everyone. Drivers can commit to the following:

To further extend the reach of the campaign, Go Human is also providing co-branded advertisements to stakeholders across the region, including lawn signs, banners, and messaging on transit, which can also be adjusted to respond to the pandemic. If you’re interested in bringing Go Human advertisements to your community, email Andrés Carrasquillo at carrasquillo@scag.ca.gov.

The advertising campaign is supported by funding from the California Office of Traffic Safety, through the National Highway Traffic Safety Administration.