SCAG’s Go Human program is thrilled to highlight four (4) projects that the American Planning Association has awarded at the section and state levels! The following Go Human partner projects have been recognized for positively impacting traffic safety and community engagement across the region.

This project increases understanding of planning issues in Los Angeles by centering the question, “How safe are Black lives while cycling?” Residents and mobility justice advocates share raw and personal experiences as well as data in this film to illustrate the deep need for planning processes rooted in racial justice.

Using the film as a catalyst, Davis-Overstreet continues to align the work of her interviewees to eradicate racism and create safer spaces for Black Lives to bicycle. Davis-Overstreet’s diverse advocacy efforts and Biking While Black are a powerful reminder that truly inclusive planning is grounded in the lived experience of impacted communities.

In addition to being awarded the Best Bicycle Film at the Better Cities Film Festival in Detroit, Biking While Black was awarded the Communications Initiative Award of Merit from the APA California Chapter and the APA Los Angeles Section.

This 2022 and 2023 Go Human Mini-Grant awardee utilized grant funding to implement an LGBTQIA+ pride-themed mural crosswalk in the City of Redlands, showcasing the importance of both safety infrastructure as well as inclusion and representation as a means of saving lives. The project increased visibility of pedestrians and improved traffic safety on a highly trafficked downtown street, while directly investing in local LGBTQIA+ artists in the community.

Supported by a coalition of local artists and community members, the project, with its rainbow design, is placed on Vine Street between Cajon and 6th Street, just outside the historic former Rainbow Theater. This crosswalk represents a grassroots effort to build and shape a community that values creativity and cultural representation to invest in multiple layers of safety, inclusion, and care for its community members.

The ArtLands Crosswalk Mural was awarded the Grassroots Initiative Award of Merit by the APA Inland Empire Section.

This implemented project is connected to a Go Human demonstration project which catalyzed community engagement and feedback in the City of Palm Desert. At the demonstration in 2018, over 2,000 participants gave their overwhelmingly positive feedback on proposed streetscape improvements on the corridor. Completed in 2021, the improvements became a reality, with the City of Palm Desert installing permanent streetscape features that improve the walking and biking experience, including a roundabout, expanded sidewalks, public art, artistic crosswalks, pocket parks, and over 300 street trees.

This 2018 Go Human Mini-Grant awardee conducted community engagement in the unincorporated community of Muscoy in San Bernardino County and showcased temporary safety improvements, which resulted in a $1.88M infrastructure grant from the California Active Transportation Program. 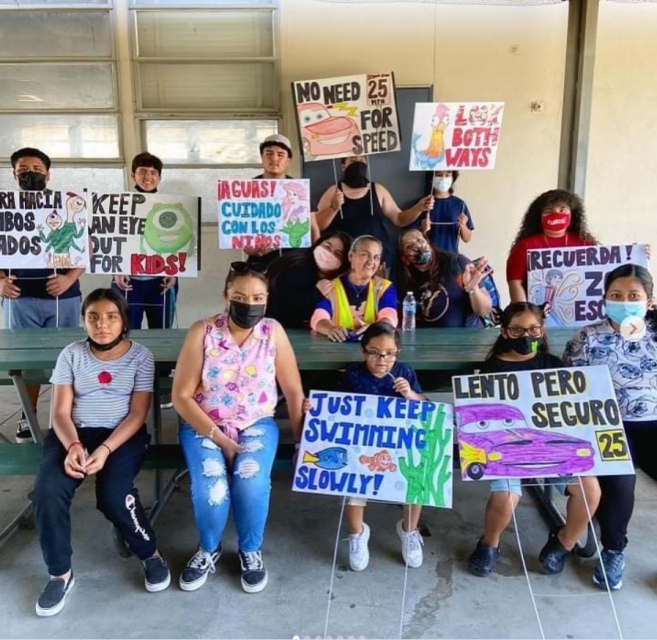 Through years of community-involved advocacy for pedestrian improvements, the Muscoy Sidewalks for Safety project has had direct impacts on improved traffic safety, health, wellness, sustainability, and access to education in Muscoy, a low-income, 82% Latinx neighborhood, that has historically carried enormous environmental burdens. Led by a coalition of students, parents, and community members, this project truly reflects community mobilization to respond to urgent neighborhood needs. This community’s leadership is a map for justice and equity-centered planning.

Muscoy Sidewalks for Safety was awarded the Healthy Communities Award of Merit by the APA Inland Empire Section.

Congratulations to all APA-awarded projects and community partners!