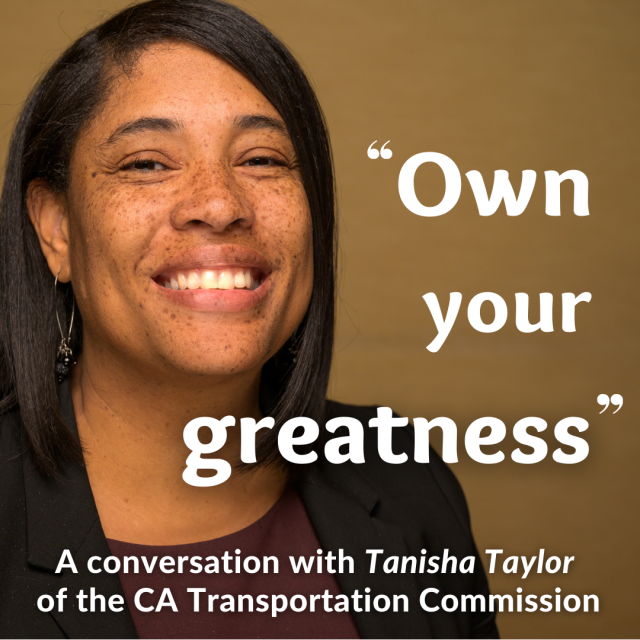 In celebration of Women’s History Month, we had the honor of speaking with one woman who is making history in the transportation field: Tanisha Taylor, Chief Deputy Director of the California Transportation Commission. Tanisha’s vital work in transportation affects everything from air quality to sustainable housing standards. For over 15 years, she has positively shaped communities in California. In the interview below, she tells us about her journey, her identity, and her work.

Tanisha has chosen to highlight the Thurgood Marshall Scholarship Fund in honor of Women’s History Month:

“As a graduate of a historically Black college and university, I find this scholarship fund important to the diversity of the planning field.”

Can you describe the place in which you grew up?

I am a military kid, and I have been fortunate that I have been in California most of my life. I was born in Avon Park, Florida and lived there for a year. After that I lived in Berlin, Germany for a year behind the Berlin wall from ‘81 to ‘85, and then we moved to California when I was five years old. I grew up just south of the Placer County line in Sacramento County, in a small town called Antelope, California.

I always tell this story because I think it shapes who I am and it speaks to what drives me and why I’m passionate about the things that I’m passionate about. In 1988, my parents bought their first house. When my mother went to look at the model homes, she went to a realtor in another part of Northern California, near Sacramento, and was told “you don’t want to live here” — meaning us as African-Americans. My mother knew exactly who the “you” was, but that shaped how we got into Antelope, California, because it was a city that was more diverse and more welcoming to minorities at that point in time.

How did you get into the field? Tell us about your journey.

I got into the field a little bit by accident, but a little deliberately at the same time. I received a partial scholarship to Alabama A&M University to play softball and a partial academic scholarship, which made it a free ride for me. I majored in political science, and I didn’t really think about planning. I came home during the dotcom bust in 2002, and it was hard for me to find a job in my path. So, I went back to grad school, and I decided planning would be what I would do there.

As I was coming near the end of grad school, I was lucky to get an internship with the San Joaquin Council of Governments (SJCOG). I started at SJCOG in 2006, and I spent the first 10 years of my career there. I give a lot of credit to the people at SJCOG, in particular, (former Executive Director) Andy Chesley and (former Deputy Director) Dana Cowell.

When I started my career, I was devastatingly shy. I did not speak a word. But that has shaped me because I haven’t forgotten that. When I see a planner who is shy or appears afraid, or maybe isn’t as confident in their voice, I make it a point to call on them and to ask their opinion, especially in a large room. It’s intimidating when you’re sitting with people who have 20 or 30 years of experience to be able to say, “Well, I have a different opinion,” or “I have some thoughts that might help.” You would never know if you have those shining stars if you don’t say, “I haven’t heard from this person, would you like to contribute?” Sometimes it just takes that for people to start speaking. And I recognize, “You know what, you’re going to be a star. You just don’t know it yet. Let’s talk. I know you know something, I know you have opinions, let’s hear them.”

My phrase is own your greatness. I want to make sure I remind everyone around me of their greatness, because everybody has something great to bring to the table. Everybody has a different skill. Collectively, we are so much stronger and so much better. If I can impart to one person they are great, I feel that can help somebody in a way that helped me.

How does your work encourage transportation safety, walking, and biking in California?

In March, the Commission will take action to award the Cycle 5 Active Transportation Program, which is about $440 million. The guidelines we developed shape transportation policy in some regards, and so we have a lot of influence in that way. Going further back in my career, I managed the Regional Transportation Plan at SJCOG for the entire time I was there. That work entailed identifying the bike network that aligns with the greater transportation vision for San Joaquin County and ensuring that we’re matching the dollars to deliver that vision to the region.

What challenges have you encountered along the way?

In transportation, there can be an urban, suburban, and rural split, depending on the issue. When the Affordable Housing Sustainable Community program first started, the first set of guidelines effectively left the San Joaquin Valley out because of the required densities and the maximum number of units that the projects had to have. It’s hard to get one metropolitan planning organization (MPO) together in a 30-day comment period, but I was able to get the eight San Joaquin Valley MPOs together during a 30-day comment period to provide comments.

Even further, we provided examples of good projects in the Valley that showed smart growth and livability concepts that were GHG-reducing. This way the Strategic Growth Council could understand the limitations of that first draft of the guidelines. And they actually changed the guidelines! Now the Valley is successful in the Affordable Housing Sustainable Community program because we worked together to effectuate positive changes. I’m really proud about that.

Then there’s the obvious challenges of just being a woman in transportation. Everybody doesn’t respect women in the same way, unfortunately. There have been times where I’ve had to stand up for myself and say, “You’re going to respect me because I’m the decision maker.” Those are unfortunate situations. They are few and far between, but they do happen.

What project are you most proud of?

In January the Commission took up an anti-racism statement. Having the team, as well as people outside of the agency reach out to say the Commission’s statement makes them proud, warms my heart. Seeing our words echoed in SCAG’s equity work exemplifies the importance of the work we do in this area.  As a woman of color, it is an issue that is personal and critically important to me.

Who are inspiring women in your life who have supported you along the way?

That’s my mom. My mother has always been a fire starter. At one point she was a nurse and a shop steward in the union. At her hospital, there were two unions trying to unionize the nurses, and she was part of the negotiations to make sure that the workers had all the protections they needed.

I always say, my mother probably couldn’t have been the Chief Deputy Director of the California Transportation Commission when she was my age. I’m only 40 years old. Yes, we have made progress, but we absolutely have a long way to go.

What advice would you give women of color looking to make a difference in the transportation field?

The most powerful advice I would give to women of color is that their voice has more power than they know. Don’t be intimidated. Speak up, speak passionately. There’s nothing wrong with passion.

I would also say find mentors, because someone else has gone through what you are going through. No matter what it is, there’s someone. That mentor can be a man, it could be a woman — it can be someone with whom you feel comfortable having a candid discussion about how to deal with issues.

Thank you so much. You really exemplify the advice that you gave.

Thank you. I try, especially having come from a very humble, very shy start. I just feel like everybody’s got a strength, we just have to figure out what it is and help them elevate it. That’s our job — to build people up, not beat them down. Everybody’s important.

This interview has been condensed and edited for clarity.