SPM is a web-based scenario development, modeling, and data organization tool developed to facilitate informed and collaborative planning among counties/subregions, local jurisdictions, other stakeholders, and the public. Built on open-source software platforms, SPM includes a suite of tools and analytical engines that help to quickly illustrate alternative plans and policies and to estimate their transportation, environmental, fiscal, public health, and community impacts. Moreover, SPM provides a common data framework within which local planning efforts can be easily integrated and synced with regional plans.

Senate Bill (SB) 375, which was passed by the California Legislature and signed into law by the Governor in September 2008, requires each Metropolitan Planning Organization (MPO) to develop a Sustainable Communities Strategy (SCS) for reducing carbon emissions. Under SB375, each MPO needs to provide the public with the necessary modeling information and tools for an informed assessment of the issues and policy choices in the development of SCS. Accordingly, in Spring 2011, SCAG developed the Local Sustainability Planning Tool (LSPT), a GIS-based sketch planning tool that allows users to create land use scenarios and analyze their impacts. Provided with preliminary scenarios of their planning areas, local planners were able to create, modify, and compare different land use scenarios and their subsequent impacts on vehicle ownership, vehicle miles traveled (VMT), mode use and GHG emissions. This allowed the local government participation in the development of the 2012 -2035 RTP/SCS to be far more fruitful than it otherwise would have been.

When SCAG initiated the 2016-2040 Regional Transportation Plan/Sustainable Communities Strategy (RTP/SCS) process, additional functional and analytical needs were identified to better foster the creation of a highly realistic and implementable SCS through a “bottom-up” approach. After the thorough review of scenario planning models and tools in practice, SCAG joined other major Metropolitan Planning Organizations (MPOs) in California – Sacramento Area Council of Governments (SACOG) and San Diego Association of Government (SANDAG) – in the enhancement and customization of the open-source version of UrbanFootprint . In order to make the customized tool useful to subregions and local jurisdictions, SCAG formed a Working Group in 2013 that included representatives from all counties and subregions in the SCAG region to serve as an advisory group on functional and operational aspects of the model. The Working Group offered an invaluable source of support and guidance in the development and implementation of UrbanFootprint based SCAG Scenario Planning Model (SPM).

Primary Purpose And Current Use

The primary purpose of SPM is to enhance the Region’s ability to address complex issues and evolving challenges by providing better information about alternative future scenarios and by building an improved linkage between local and regional planning. Within SCAG’s integrated modeling and forecasting system, SPM serves as a conduit for the delivery of up-to-date and locally vetted data and plans to key SCAG models by: delivering locally vetted data and plans to key SCAG models to ensure that regional plans are consistent with local data and policy inputs; and providing directional and order-of-magnitude impacts of local land use and policy decisions that will assist in the development of regional plans and associated scenario analysis.

SPM was initially deployed as two separate web services – SPM Data Management (SPM-DM) and SPM Scenario Development and Analysis (SPM-SD). SPM-DM tool was released in late 2017 to all local jurisdictions in the SCAG region to support the 2020 Connect SoCal (or 2020-2045 RTP/SCS) process by providing a common platform to share, review, update and disseminate data between SCAG and local jurisdictions. SPM-DM was instrumental in the timely and efficient review of and decision on important plan datasets and had supported in building a local-regional database connection until it was sunsetted in 2022. SPM-SD tool incorporates multiple analytical modules that produce a variety of critical metrics to inform and envision possible futures under different demographic growth, land use, and transportation scenarios. SPM-SD has primarily been used for regional plan development and analysis activities and remains to play an important role in facilitating scenario creation and editing with advanced analytic capabilities. 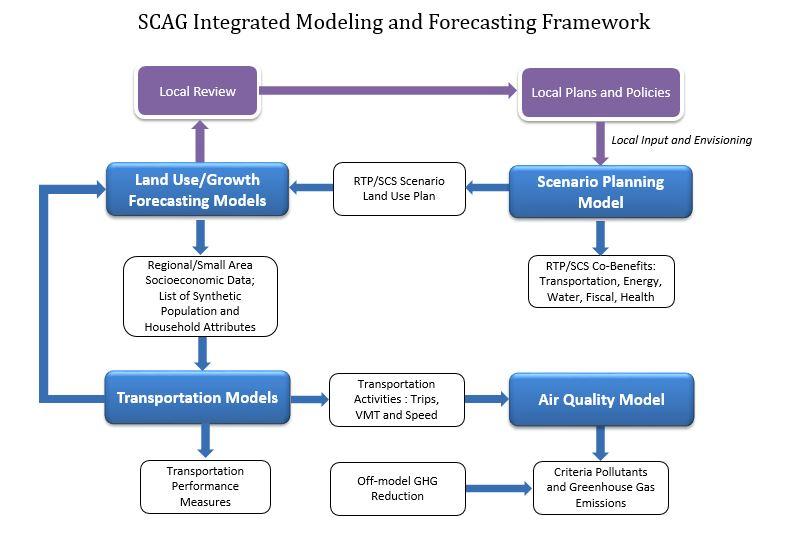