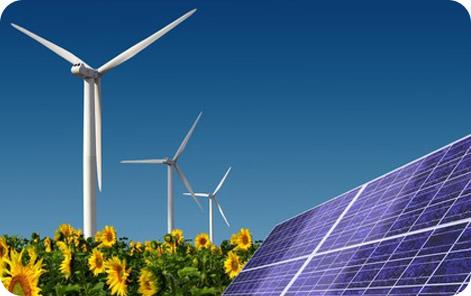 Renewable energy is defined as including the following sources of energy:

The California Energy Commission recommends various strategies be employed to expand the renewable energy mix in order to diversify the energy supply as well as decrease greenhouse gas emissions. Some strategies include increased production of ethanol from cellulosic biomass material such as municipal, agricultural, and forestry wastes.

Solar energy is the radiant light and heat from the sun. The technologies used to harness solar energy include solar heating, solar photovoltaics, solar thermal electricity and solar architecture. Solar energy is considered to be inexhaustible and a clean renewable energy source.

Solar energy technologies are broadly characterized as either passive solar or active solar depending on the way they capture, convert and distribute solar energy. Active solar includes the use of photovoltaic (PV) panels and solar thermal collectors to harness the energy. Passive solar includes building orientation, building materials with favorable thermal mass or light dispersing properties, and designing spaces that naturally circulate air.

Geothermal technologies use wells that tap the difference in temperature between the core of the planet and its surface. This thermal energy, or heat, can be used directly to heat homes or neighborhoods, or can be converted into electricity. Geothermal energy is considered to be inexhaustible, although not broadly located, and a clean renewable energy source.

Wind power is the conversion of wind energy into electrical or mechanical energy, through the use of wind turbines, windmills, or windpumps.  Each of these can be individual installations, or collectivized into large installations.  Large wind farms may consist of several hundred wind turbines which are connected to the electric power transmission network.  Wind power, as an alternative to fossil fuels, is considered to be inexhaustible, although sporadic, and a clean renewable energy source.

The USGS has created this publicly available national dataset and interactive mapping application of wind turbines.

Hydro energy, or hydropower, is power derived from the energy of falling water. Hydropower can produce electricity or can power various mechanical devices, such as watermills and sawmills. One common method of using water energy is a hydroelectric dam, where water run electric generators. Power can also be generated from the energy of tidal forces or wave power, which uses the energy created by moving waves. Hydro energy is considered to be inexhaustible and a clean renewable energy source.

The effective date of the NSHP Guidebook, Seventh Edition is January 1, 2014.